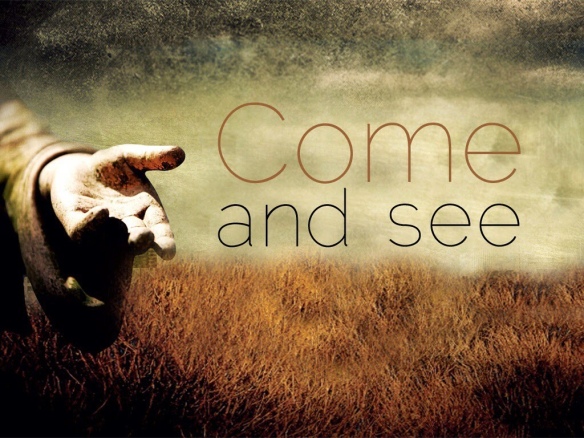 Skepticism can run a mile deep in me. I’ve come to a place in my life that reflects what a true Missouri girl would say. “Show me”. But even when shown I’m still watching intently for some slight of hand, hidden agenda, inconsistency, etc.

I’ve been reflecting this morning on the words of Nathanael in the Bible: “Philip found Nathanael and told him, “We have found the one Moses wrote about in the Law, and about whom the prophets also wrote—Jesus of Nazareth, the son of Joseph.” “Nazareth! Can anything good come from there?” Nathanael asked. “Come and see,” said Philip.”

The more I think about it, the more I realize that Nathanael is my kind of guy. When he was approached by Philip telling him he had found the messiah, Jesus of Nazareth, Nathanael’s caution alarms sounded and his skepticism wheels began to turn. I would estimate that it was all motivated by him going around the block one too many times with the people he had seen coming out of Nazareth. During his time, a Roman army garrison was located there. The very army that oppressed his people. He had probably seen the injustices and watched the politics played out as some of the Jews tried to “make the best” of the situation by compromising their morals and betraying their countrymen all in an effort to win the favor of their unwanted residents. So hearing that the Messiah, the one who was supposed to set all this wrong right, came out of that town set off a huge red flag. Thankfully he did find it within himself to check out the claims he heard, and when he encountered Jesus, Jesus told him “Here truly is an Israelite in whom there is no deceit.” Jesus recognized the truth that Nathanael wanted. He only wanted what was real. Nothing fake for that man, and Jesus assures him that his desire for the authentic would be satisfied with Nathanael seeing greater things than he could have ever imagined.

Jesus gets where we are coming from, and He understands our struggle with vulnerability. Especially in a world where vulnerability can often mean opening ourselves up to hurts that cannot be imagined. But He also calls us out to take the chance to believe and to hope. Knowing that His hope does not disappoint.

Nathanael had a choice that day. He could have declined the invitation to look, to go and see. It would have meant a life of the ordinary for him. If he had stayed where Philip found him and said, “I’m out”, he would have never encountered the one of whom he wondered “How do you know me?” One encounter with Jesus rocked his world of skepticism. It opened his heart to the vulnerability of believing and enabled him to receive things he probably never imagined possible growing up a boy in Cana just doing the daily ins and outs of life.

I find myself this morning sitting at a crossroad. Do I ball up in my corner and shut out the possibility of encountering something incredible? Or do I open myself up once again to feel. Feel not only the hurts that vulnerability can bring, but the joy and love it brings as well, and to experience the joy of being known as well as knowing the life that God intends for me.

I am really grateful that God saw fit to put this interaction between Nathanael, Philip, and Jesus in the first chapter of John. It gives me hope that in my times of questioning what is real and what is not, God doesn’t just mark me off for my struggling to believe. Instead He makes a point to clarify exactly where He has seen me in the past and where He plans to take me in the future when I acknowledge who He is: my God, my King, and the Teacher of how to get where He wants to go. He doesn’t give up on me. He encourages me to get up and move on. He’s got plans for me, and they are good. Whether I see it in the present or not. His invitation to me is the same as Philip gave to Nathanael, “Come and see”.